Crocker Farm held an internet, phone, and absentee auction from April 6 to May 1, with a special live callback session on May 2 for lots that achieved a bid of $1,000 and over. The speciality auction company originally planned to hold its sale on March 21 at its facility in Sparks, Md.
Among the highlights, and one of the most exciting pieces of American stoneware to ever sell at auction, was the Broadway Cooler. Recently discovered out West, the 26-inch-high seven-gallon stoneware water cooler with phenomenally detailed incised and impressed decoration of New York City's Broadway, stamped twice, "W.H. FARRAR & CO. / GEDDES, N.Y.," dated 1846, the ovoid cooler with stepped pedestal base, tall, flaring collar, and rope-twist handles was a new discovery to the world of pottery collectors. It sold for $480,000 (est. $100,000-$200,000) to New York state collector Adam Weitsman, underbid by a another collector.
The cobalt-highlighted street scene design depicts the celebration of the Great National Jubilee of the Order of the Sons of Temperance, a fraternal organization founded on the principle of abstinence from alcohol in New York City in 1842, born out of a meeting held at 71 Division Street in a building called Teetotalers Hall. From 16 men primarily involved in the printing and publication trade, within five years the organization would boast over 60,000 contributing members nationally, broken up into a considerable number of local divisions. While Salina Division's membership and exact date of institution are unknown, based on its designated number, 86, the group came into existence in or about the fall of 1845, less than a year before the Jubilee. It seems likely that William H. Farrar was himself involved with the Salina Division. The cooler possessed several re-glued repairs.
For a full catalog and prices realized, visit www.crockerfarm.com. 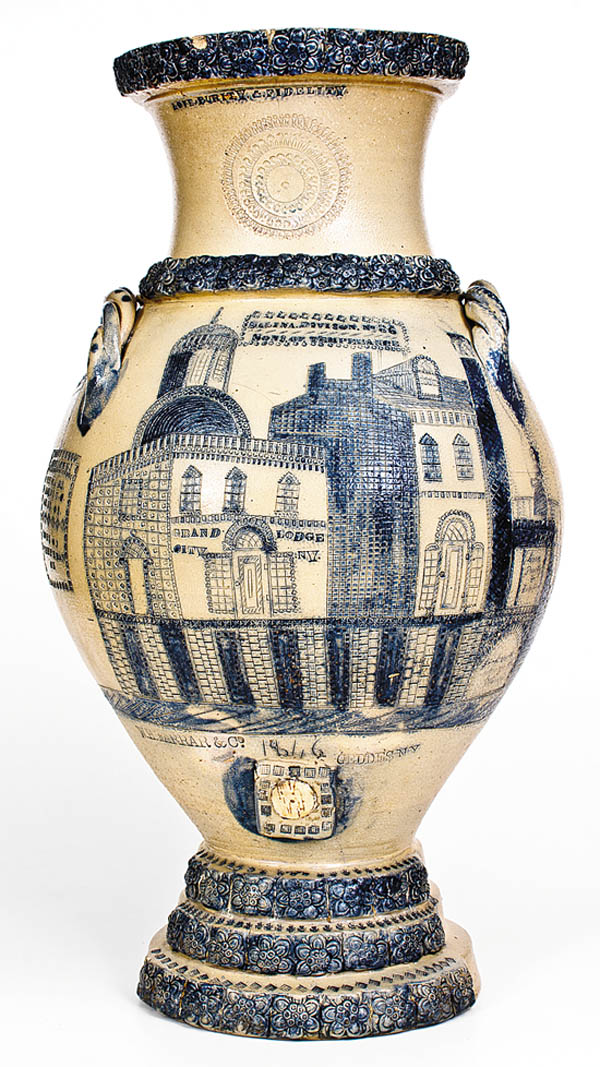