Crocker Farm of Sparks, Md., will hold their next stoneware and redware pottery auction on Saturday, March 14. One of the items expected to generate considerable interest is a rare cobalt-decorated stoneware presentation harvest jug with applied faces, incised "R.G. Simkin," attributed to Henry Harrison or Richard Clinton Remmey, circa 1855-1865.
Few American stoneware forms are as evocative and expressive as those referrred to as "face vessels." Examples produced in the North, South, and Midwest grace the shelves of some of the finest American antiques collections in the country, and few native ceramic objects have traversed the pottery arena into the folk art realm like this captivating form. This harvest jug exhibits classic Remmey family traits, and was produced in Philadelphia by Henry Harrison Remmey or his son, Richard C. Remmey, likely prior to the latter's ascendance to owner of the family enterprise. Featuring a piercing countenance on both sides, this object is possibly the first Remmey example to come to auction since the John Gordon sale at Christie's in 1999, in which a similar, yet broken and reglued jug was sold. It realized $8,050.
English-born Richard G. Simkin (circa 1822-1868), the jug's recipient, owned several hotels in Philadelphia, including the prominent Wetherill Hotel located on Sansom Street in close proximity to Independence Hall. Period documents list him as "R. G. Simkin," as inscribed on this vessel.
The Crocker Farm piece is a fresh-to-the-market example, purchased by the consignor approximately 20 years ago. It measures 7.5-inches to the top of the arch handle. The face is on both sides and one side possesses loss to the mouth and chin which occured in the firing process.
A stoneware face vessel in pitcher form sold at Pook & Pook at the Richard and Rosemarie Machmer sale in 2008 to a Pennsylvania private collector for $81,900. It was cataloged with both a Remmey and Philadelphia attribution but is widely considered to have been made at the Greer family operation in Chester County, Pa., known as the Mount Jordan Pottery. The pitchers face had a more refined quality as opposed to the Crocker Farm harvest jugs cruder, more folky execution. The harvest jug also possesses a deeper, more vivid cobalt. The pitchers clay body is slightly darker, a characteristic of Greer pottery.
To learn more, visit www.crockerfarm.com. 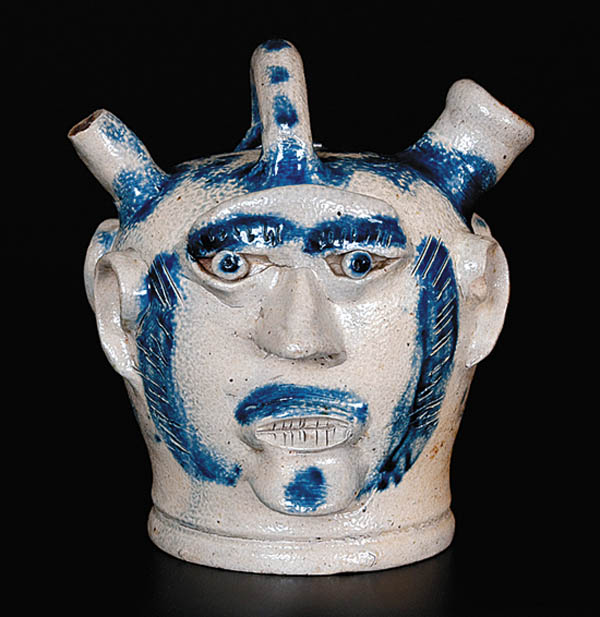