Cut-Sponge Ironstone China From The Mayer Pottery: A Brief History

The vast majority of cut-sponge ironstone china, sometimes called spongeware, was made in England, Scotland, Holland, and also Germany, mostly in the second half of the 19th century. However, the Mayer Pottery produced cut-sponge china at two operations in the U.S.
So, what is cut-sponge? Multi-colored decorations were applied to wares such as bowls and plates by using the root of a natural sponge, which had a design carved into it. Pottery suppliers sold un-cut and also cut root sponges in various sizes and designs to producers. The root cut-sponge was typically afixed to a wooden handle and then dipped in paint for application.
Mayer produced cut-sponge ironstone china in Beaver Falls, Pa., which is believed to have been established in 1881. Five years earlier, a Mayer pottery was started in Trenton, N.J. From 1876 to 1905, owners James and Joseph Mayer ran the Mayer Pottery Manufacturing Company at the Arsenal Pottery in Trenton. The original owners of the Beaver Falls pottery were Joseph, Arthur, and Ernest Mayer.
When the new Route 29 in Trenton was under construction not far from the Delaware River, thousands of Mayer ironstone sherds were unearthed. Common marking for wares from the Trenton operation consisted of black transfer printed IRONSTONE CHINA arched above a British crowned oval with an M in center over MAYER POTTERY MFG CO. The Latin inscription in the crowned oval translates to shame be he who thinks evil of it. This basic British coat of arms mark was common. Many pieces bear no mark. The mark used is similiar to one from the Beaver Falls pottery. One read, Semi-Vitreous China arched over the Pennsylvania state seal and Warranted/J. & E.M. Another reads, Mayer Pottery and Beaver Falls Pa.
So, what was produced where? Well, the two Mayer potteries used the same technique and motifs, but colors are believed to have differed. Red and black are believed to have been used only in Beaver Falls.
Also, not a lot is known of timelines on what was produced where. The Trenton pottery might have shifted sponge-decorated china production to Beaver Falls for Majolica, which was heavily produced in Trenton in the 1880s. Other operations also used Mayer motifs. Potteries in Staffordshire, England, and Scotland did this. Also, the Columbian Art Pottery in Trenton from 1893 to 1902 used a brown tulip border with inner blue orchid border on brown leaves very similiar to Mayer. And the Willets Manufacturing Co. in Trenton was known for the blue diamond-shaped floret. Florets were common Mayer motifs, along with interlocking chains. Potteries bought from the same cut-sponge suppliers.
What forms did the Mayer pottery produce? Various size shallow oval baking dishes, cups, saucers, round bowls of various sizes, round bowls with scalloped rims, spittoons, round plates, and oval platters were all made at the Mayer operation.
Writers and collectors Earl and Ada Robacker collected Mayer Pottery. Horst Auctions in Ephrata, Pa., sold the Robacker collection in a series of sales in 1989. During session one, a marked oval dish with green and red design brought $65; six plates, stamped and all with the common blue chaplet design, $180; and six cups and saucers, all blue chaplet design, marked, sold for $155.
The photos show an array of forms and design patterns.
Images are by the author, and items are from his collection. 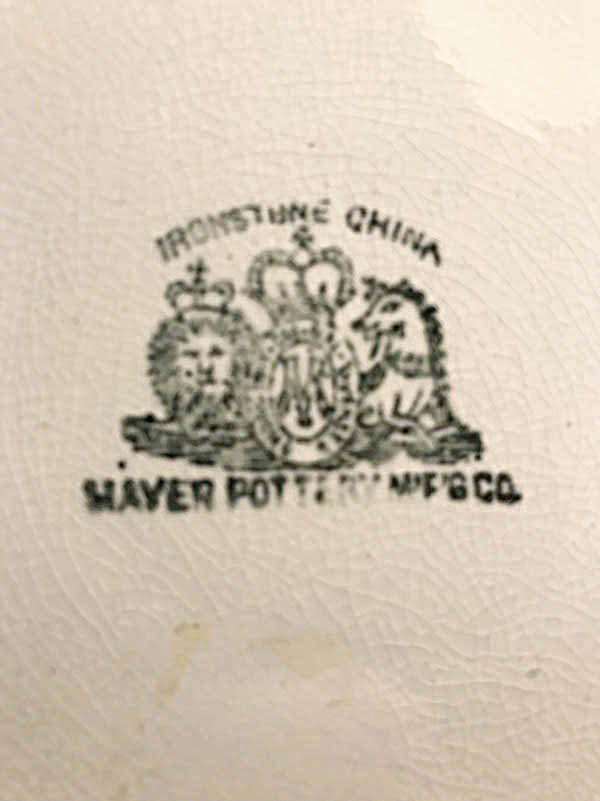