I try for the best, and it is a masterpiece," said private collector Jerry Lauren of New York City, referring to an important seven-gallon stoneware cooler from Baltimore, Md., with rare incised eagle decoration which sold for a new world-record price of $438,000 at Crocker Farms auction in Sparks, Md., on Oct. 17. He was the buyer bidding by phone. The underbidder was dealer Kelly Kinzle bidding in the salesroom.
We think it is the best piece of stoneware to sell since 1991, said Tony Zipp of Crocker Farm. In 1991, the iconic William Crolius inkstand sold at Sothebys for a then-record price. The inkstand has since been gifted to the Metropolitan Museum of Art.
The stoneware cooler with incised Federal eagle design was attributed to either Henry Remmey Sr. or Jr. and made in Baltimore between the years 1812 and 1829. The sale of the cooler is the highest bid ever recorded for American stoneware ($420,000). Crocker Farm charges a 15 percent buyers premium.
The eagle is amazing. It supercedes anything. I search for 10s, and this is a 12," said Lauren following the auction. Lauren is the creative director and executive vice president of men's design at Ralph Lauren. It is a position he has held for 42 years.
A fresh-to-the-market item, the cooler was purchased by the consignor's father in the early 1970s. It has large open handles with added segments in the center of each handle for added stability. The incised eagle design was an adaptation of the Great Seal of the United States and, according to the Zipps, copied by the decorator from the reverse of coins in circulation at the time. Charles Sims "heraldic eagle" appeared on the back of most coins and depicts a spread-wing eagle facing left, toward the arrows, its head encircled by stars and clouds, its talons clutching olive branches and arrows with a shield across its chest.
The majestic ovoid form stands 19.25 inches tall and had some minor chips to the stepped bunghole and a crack extending from the rim to the midsection. It also had some minor rim chips due to use and age. The deep cobalt was vivid and stood out in the design. Its presence takes the air out of the room, said a dealer at the sale.
To learn more, visit www.crockerfarm.com. 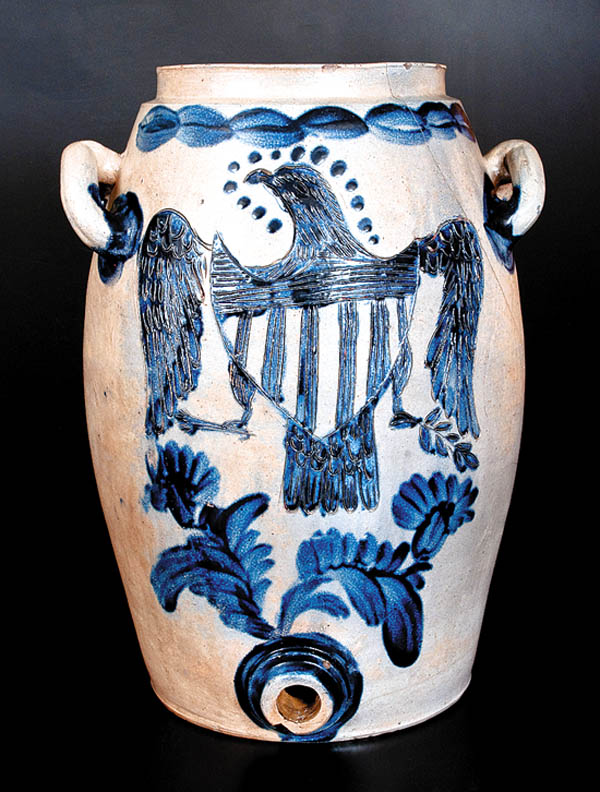