Snoopy, that fiddle-player from Fiddler on the Roof, Winnie the Pooh, the Easter Bunny. What could the members of this unlikely quartet possibly have in common? Well, at one time or another, theyve each been featured on a novelty music box. Joining them: a multitude of other pop culture characters, from Minnie Mouse to Humpty Dumpty. Also churning out the music box tunes: plenty of easily recognizable things (souped-up 50s roadsters, merry-go-rounds); easily recognizable places (Alpine hillsides, the Little Brown Church in the Vale); and easily recognizable generics (little kids with pets, old men puffing on pipes, sad-faced clowns, and the list is never-ending).
Novelty music boxes were often gifts for special occasions (birthdays, graduations, weddings, etc.). Some celebrate certain times of the year (Christmas for sure, but Easter, Halloween, and St. Patricks Day are in the mix). Even holiday-themed music boxes usually stay out year-round, since many do double duty: open the lid, and theres a velvety-cushioned repository just right for miniature mementos.
Numerous novelty music boxes are fashioned of china, metal, or glass. A bit higher up on the value ladder are all-wood, hand-carved boxes. A bit lower down, all-plastic. But regardless of their base material, the function remains the same. Wind them up (or, on the newer battery-operated versions, flip a switch), and the music boxes repeatedly tinkle out identifiable 18-note segments of a popular or semi-classical tune. You can even make a reasonably accurate stab at the date of manufacture by identifying the song thats playing. If its the Theme From Love Story, chances are good the box dates from the 1970s.
The music box heritage is a lengthy one. The very first mechanical musical instrument is credited to a trio of brothers in Baghdad, who created a hydropowered organ in the 9th century. By the 13th century, a bell-ringer in Flanders had come up with a means of making his job easier, with pins and cams mechanically striking out melodies on the church bells. Over the next several centuries, a variety of mechanized musical objects continued to pour forth from inventive minds. There were towering musical clocks and tiny musical snuff boxes, plus plenty of musical automata, like the jeweled singing bird Hans Christian Andersen wrote about in The Emperors Nightingale.
Early musical mechanicals were primarily toys for the well-to-do. More affordable music boxes had to wait until the early 1800s, when skilled Swiss watchmakers turned their talents to music-making. Essentially, what came to be recognized as a music box played its simple melody when a set of pins on a revolving cylinder plucked the teeth of a steel comb. The music box industry received a major boost in 1870 with the introduction of removable discs. While the function was the same, a cylinder could play just one melody. With removable discs, a change of disc, a turn of the crank, a music box could play tunes aplenty. By the early 1900s, they had become a must-have household staple. As the Sears, Roebuck & Co. catalog put it: In any home, rich or poor, the music box will be a pleasure. No costly music lessons are necessary, as the music produced by this beautiful instrument is just as charming and delightful as that of any piano.
During its heyday, plenty of music boxes were sold. (Regina, the industry leader, is estimated to have moved at least 100,000.) But, by the 1920s, the player piano and the phonograph had captured the ear of those in search of mechanized music. Today, antique cylinder and disc music boxes command the big bucks, as do their modern re-creations.
Fortunately, vintage novelty music boxes, with their pop culture themes and 18-note instrumentals, remain perfectly in tune with todays pocketbooks; most sell for well under $50. Thats one reason why they continue to attract gift-givers looking to please gift-getters. Well, and who can resist Snoopy?
Photo Associate: Hank Kuhlmann.
Photos by Donald-Brian Johnson. 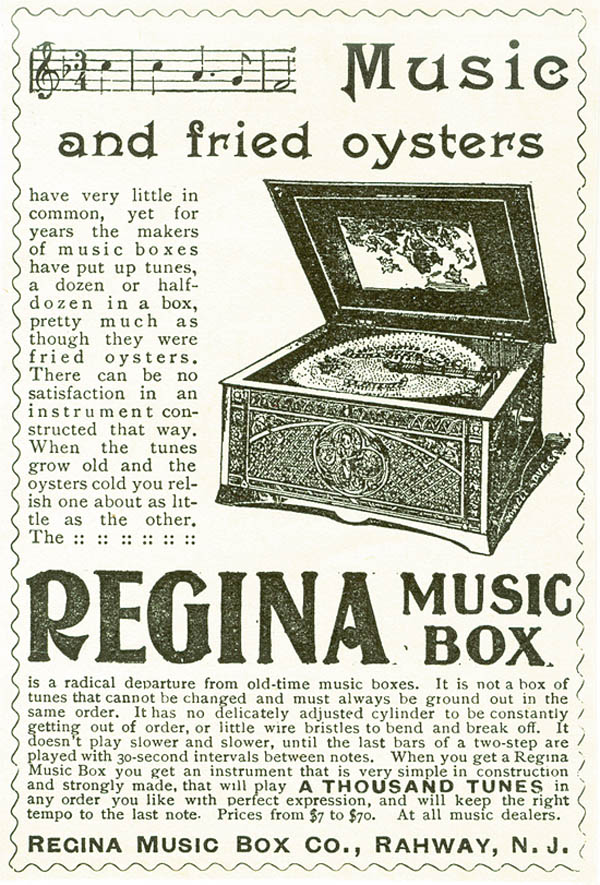