In writer-director M. Night Shyamalans 2000 film Unbreakable, comic-art gallery owner Elijah Price flinched when a would-be buyer said he was buying a valuable, vintage original for his 4-year-old son. You must think this is a toy store, Samuel L. Jacksons character snarled at the customer before correcting his misconception.
This is an art gallery, my friend, Elijah told the man. This is a piece of art. Its value will triple every year. This piece is to be treasured, to be cherished, to be coveted by every single one of your banker friends that think theyre better than you.
That monologue proved prescient: The comic-art collector, once dismissed by the serious art world as obsessive fanboy, is now a legitimate curator of serious and respected art, which is as it should be. The works are the raw, handmade images that sparked countless kids imaginations, singular moments made to mass-manufacture for spinner racks and comic shops. They spark nostalgia, yes, but are also important cultural touchstones and, of course, the invaluable building blocks of now-inescapable entertainment franchises.
And many works of original comic book art have become as treasured and celebrated as anything painted on canvas, as evidenced by the $1.125 million sale of the very first published Tintin cover in June 2019. And just this year, page 25 from 1984s Secret Wars No. 8, which told the origin story of Spider-Man's now-iconic black costume, sold at Heritage for $3,360,000. Art collectors across all genres now seek out the vaunted, valuable works of Jack Kirby, The Metabarons co-creator Juan Giménez, Jean Giraud (better known as Moebius), Tintins father Georges Prosper Remi (known by the nom de plume Hergé) or Don Rosa, the Eisner Award-winning creator of the beloved Life and Times of $crooge McDuck.
All of those, among countless other revered creators and creations, provide centerpiece offerings in Heritage Auctions latest comic-art event, the Friday, Saturday, and Sunday, March 11, 12, and 13, International Original Art and Anime Signature Auction. This is a genre-sweeping, globe-trotting event offering collectors another extraordinary opportunity to own some of the most significant and transcendent works in all of comicdom and mangadom.
Among them: Hergés Tintin Family illustration from 1955, made as a Christmas gift in December and described by Olivier Delflas, Heritages director of International Comic Art, as a sublime treasure.
Signed by the artist, this stunning, playful piece is a family portrait featuring his beloved creations: Professor Calculus and the rocket from Destination Moon, Thompson and the mushroom from the The Shooting Star, Thomson and the Arumbaya idol from the Broken Ear, Captain Haddock and the Unicorn from the Secret of the Unicorn, Snowy and the scepter from King Ottokar's Sceptre and, of course, Tintin and the submarine from the Red Rackham's Treasure.
Its extraordinarily rare to see an original work of this quality come to market, said Delflas. Its pure pleasure to offer it here.
Only weeks after that record-setting Spider-Man sale comes another page featuring Peter Parker in the black costume that later morphed into the alien symbiote called Venom. And this one, by Ron Frenz and Brett Breeding, comes from one of the most significant issues in the Web-Slingers run, 1984s The Amazing Spider-Man No. 252, which actually hit newsstands months before the costumes origin was explained in Secret Wars No. 8.
And from the publisher that had readers Make Mine Marvel comes another iconic work, this one by the King himself: page 24 from 1964s The X-Men No. 5.
The star-studded work from Jack Kirby and Paul Reinman is from the story Trapped: One X-Man, which wrapped the arc pitting Professor Charles Xaviers mutant students against Magneto and his Brotherhood of Evil Mutants, and concluded the X-Mens training sessions with their beloved Professor X. Indeed, this is the very page in which the teacher informs his pupils, Cyclops, Iceman, Angel, Beast and Jean Gray, that theyve passed the final exam with flying colors.
You've proven you can think and act for yourselves!!, Professor X says in the final panel of this action-packed page. Your training period is over!! Congratulations, my X-Men!!
Congratulations, too, to whomever winds up owning this historic work.
DC is here, too, represented by what Delflas calls Joe Kuberts surrealist take on Batman from 1996s acclaimed Batman: Black and White No. 1. And here, too, are some extraordinary works from Enrico Marini, for both DC and Marvel, including his cover for 2018s Batman: The Dark Prince, what Delflas calls one of the creepiest covers on the market depicting Batman's archenemy, the Joker.
And at the other end of the comics spectrum is this delightful page from Don Rosas 1993 Donald Duck & Company, the fourth installment in The Life and Times of Scrooge McDuck. Because, as Delflas says of this event, There is something for everyone. From everywhere.
For additional information, visit www.HA.com. 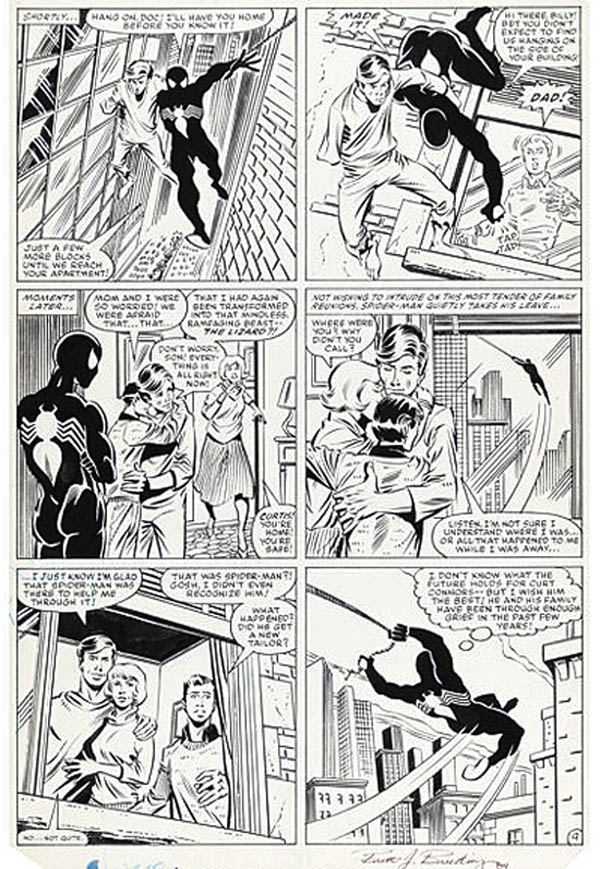