Discovering a Bradscar in mint or near-mint condition is now a model vehicle collecting equivalent of finding a needle in a haystack.
Bradscars are rare models of four British saloons from the early 1950s in approximately 1/76 scale. Three were diecast in lead, and one was a plastic molding. They were manufactured in England by Bradshaw Model Products Ltd. of Hove, on the southern coast, near Brighton. Their target audience was originally the eras OO gauge model railway enthusiasts.
Diecast Collector, an English magazine for model vehicle enthusiasts, recorded in the December 2003 issue that few choices existed in the way of model cars for OO scale electric train layouts when the first Bradscar, a Morris Six, debuted at the Annual Model Railway Exhibition at Londons Central Hall in 1951.
Production of Bradscar models didnt last long. Giovanni Scanabissi checked Bradshaws 1953, 1954-55, 1955 and 1955-56 catalogs during the research for this article without finding any listings for Bradscar models included. His research is partially confirmed by Ramsays Catalogue of British Diecast Model Toys 15th Edition (Warners Group plc, 2015), where it states, They are not mentioned in Bradshaws own extensive 1955/56 catalogue.
The Bradscar range may have continued longer if they had been advertised more often in publications other than those for model railway enthusiasts. A rare attempt to promote the models to a wider audience was in the May 1953 Games and Toys, where four models were advertised. The Morris Minor saloon in this advertisement apparently never went into production. No photos of the model appear to have been seen, nor has anyone as of yet come forward with news of finding the actual model.
Bradscars are basic models, minus the Perspex windows and plastic interiors that would be expected today. Mike Richardson writing in the August/September 1989 issue of Model Collector, another English publication for model vehicle enthusiasts, said, The bodies are one piece, and the paintwork quality would lead you to think they had been repainted by a child with only medium skill. Few of the metal castings are now seen without any paint loss or wear, and some even show the start of rusting.
Bradscar models have been seen with bodies painted in black, pale blue, red, maroon, pale green, dark green, mid-grey and tan. A challenge for collectors would be finding these cars in all the colors issued.
They did not have catalog numbers on their bases, nor were they individually boxed. Being dispatched to retailers wrapped in tissue paper and packed in dealers boxes might have contributed to the paint wear and chipping now seen on most Bradscars.
Some will notice a resemblance between the first Bradscar, the Morris Six, and the Wolesley 6/80 police cars from British crime movies and TV shows of the 1950s. They were bodily almost identical, apart from the radiator grill and trim details.
The Morris Six body casting was mounted on to an embossed black tin plate base bearing the Bradshaw logo. Morris Six appeared on the base before the logo with Bradscars (regd.) after it. Early examples of the model exist with plain bases.
The 60mm models lead wheels had a fine tire tread cast into them and were painted black. Bumpers, radiator grill and headlights received hand detailing in silver paint. Sometimes the smooth axle end rivets received a silver paint finish, too.
Although the casting failed to capture the sleekness of the real car, the model pleases some collectors more than others in the range.
A Riley 1.5 RMA was the next Bradscar, issued in 1952. This 61mm lead model receives unfavourable comparison with the larger Dinky version - no. 40a, renumbered as no. 158 in 1954 - because of the heavy appearance of the radiator grill.
Some Bradscars Rileys went on sale with Morris Six bases fitted and with a body painted in a light green shade similar to that of the Dinky model.
An Austin A30 four-door sedan was the last of the lead Bradscars, going into production circa 1953. This model differed from the Morris and Riley because the base was lead. The words Bradscar, Hove, England, Austin 7 appeared cast into the base across four lines without any Bradshaw logo - Austin 7 denotes the name the A30 was launched under at the Earls Court Motor Show in 1951.
Another difference between the Morris and Riley is the 47mm Austins smaller black metal wheels without cast tire treads. Its major design fault is the skinny rear window that is nothing like the half oval of the real car.
The final Bradscars was an injection moulded plastic Jaguar Mk VII, which, by being more of a rarity than the lead models, is a greater challenge for collectors to find. Some sources give 1954 as its year of release.
Molded into the base are the words The New Bradscar, Made in England. The model is not identified as a Jaguar and has even less resemblance to the real car than the earlier lead saloons did.
Both the Bradscar Jaguar MK VII and the Morris Six are believed to be the first model versions manufactured of these classic English saloons.
Bradscars were exported. They circumvented New Zealands tight import restrictions by being classified as model railway accessories, whereas if they were called toys, the required licence would have been refused.
A longtime New Zealand collector bought the Austin, Riley and Morris as a child in the early-1950s, saving up seven shillings and sixpence (75c) from his weekly pocket money (allowance) for them. In April 2017, he saw another three in play-worn condition at a toy fair for $270 (U.S. $186).
A month later he could have bought the three models on eBay, in a similar condition, for two-thirds the price - with Air Mail postage included. This past northern summer, paint-damaged Riley and Austin models have sold on eBay from £9.50 (U.S. $12.60). The Jaguar models have sold more recently on eBay from U.S. $15 upwarrds. In October 2017, an Austin A30 in need of a repaint was seen at another New Zealand toy fair with an asking price of $70 (U.S. $48).
Images courtesy of Ross de Rouffignac. 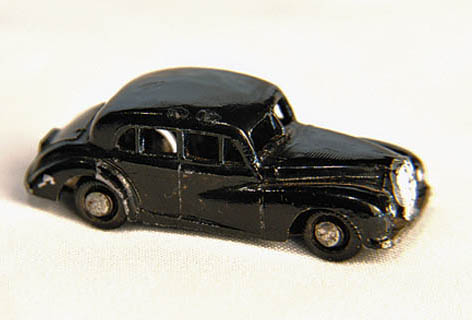