A rare stoneware honey or sugar pot by Emanuel Suter from the collection of Rudolph Evers sold for a record-breaking price of $86,250 at Jeffrey S. Evans & Associates' auction of Americana & Fine Antiques on June 22 in Mount Crawford, Va. The price established a new auction record for Virginia pottery. The pot bears a stenciled mark, "Emanuel Suter," known on this and only two other examples. Emanuel Suter (1833-1902) is widely recognized as the preeminent Mennonite potter of the American South during the second half of the nineteenth century.
The compressed ovoid form, often referred to as a squat pot, had brushed cobalt decoration along with the stenciled name. According to Evans, it was likely made by Suter while he apprenticed with John D. Heatwole at Dry River in Rockingham County, Va., circa 1851. It measured 5 high with a 4 diameter at base and was in excellent condition with very light chipping to the handles and minor wear to decoration. Suter embraced modern mechanics and industrialization. He progressed from operating a one-man, part-time pottery shop on his farm west of Harrisonburg before the Civil War to establishing the Harrisonburg Steam Pottery in 1891, which employed over 20 workmen. For more information on Suter, see A Great Deal of Stone & Earthen Ware-The Rockingham County, Virginia School of Folk Pottery, by Jeffrey S. Evans and Scott Hamilton Suter.
The previous record of $82,250 for Virginia pottery was held by the Anthony Bacher redware figure of a goat sold through Sothebys in 1995 as part of the Dr. Henry Deyerle collection. It is now in the American Folk Museum. The Suter pot was purchased by private collectors from Maryland who have ties to the Shenandoah Valley. It was a shocking price, according to many within the fraternity of American pottery collectors and dealers who did not expect the price to be anywhere near what it was. Yet, the market dictated the pot to have the merits to bring what it did.
There were other strong prices achieved during the auction. A Wythe County, Valley of Virginia, paint-decorated blanket chest sold to local private collectors for $34,500. A rare coin-silver covered fruit bowl with elaborate Rococo Revival repousse decoration, marked for retailers Mitchell & Tyler of Richmond, Va., and maker Peter L. Krider of Philadelphia, that descended in the Dooley family of Richmond, sold to a Virginia institution for $31,050 against an estimate of $5,000-$8,000.
Purchases by the Museum of the Shenandoah Valley included an extremely rare Frederick County, Va., fraktur, one of only six known by the same hand. This example, featuring a spread-wing eagle and two heart-form leaves, was a death record for Mary E. Jones and executed in gold leaf, watercolor and ink. Estimated at $10,000-$15,000, the circa 1849 fraktur sold for $29,900. The catalog entry for the lot included a possible identification of the artist of this group based on research conducted by Jeffrey S. Evans and William McGuffin.
A rare pair of circa 1775 Southside Virginia Chippendale black walnut side chairs was also hotly-contested, realizing $26,450 against a pre-sale estimate of $8,000-$12,000. They are identical to an example in the Colonial Williamsburg collection that is illustrated in Southern Furniture 1680-1830 by Ron Hurst and Jonathan Prown.
Among the fine art sold at the auction, a Southern genre painting by William Aiken Walker, also from the Evers estate, sold for $17,250. The estate collection of Betty and Richard Robertson of Waynesboro, Va., yielded two miniature portraits signed by members of the famous Peale family of artists. A Raphaelle Peale portrait of a gentleman realized $9,200, while a James Peale portrait of a woman realized $8,625. Both had pre-sale estimates of $2,000-$4,000.
The mammoth 1,010 lot auction realized slightly more than $870,000 (all prices include a 15 percent buyer's premium). Bidders from over 23 countries participated in the sale and the auction house received thousands of on line and left bids.
The demand for well-documented, fresh Southern material continues to be strong. Institutional interest in this auction was tremendous, with several museums successfully adding important objects to their collections of Southern decorative arts. As for the antiques market as a whole, we are seeing a significant increase in the number of bidders and bids, which is resulting in an uptick in prices. Buyers are recognizing the great values available in the current market and are taking advantage of some great deals, stated Jeffrey Evans.
Jeffrey S. Evans' next Americana and the South auction will take place on Saturday, November 16. The auction house has already lined up two important Shenandoah Valley estate collections that were formed primarily in the 1980s and 1990s. The firm's next auction consists of more than 2,000 Victorian glass salt, pepper and sugar shakers from the collection of the late Richard and Mary Ann Krauss of Clyde, Ohio. For more information, call 540-434-3939 or visit www.jeffreysevans.com. 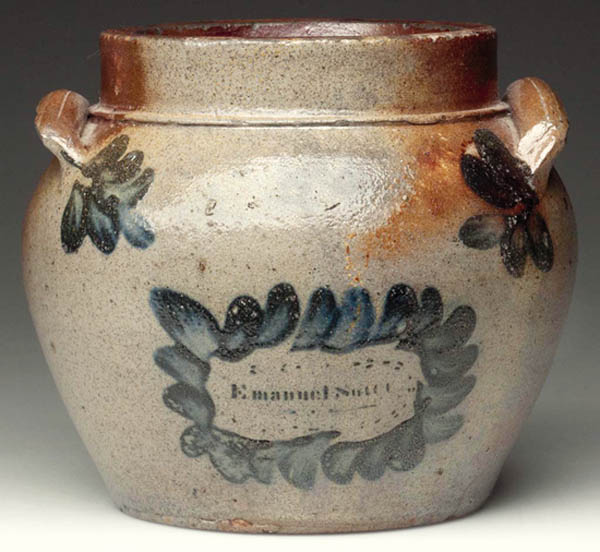