One For The Record Books

In 2015, Crocker Farm sold a large stoneware cooler attributed to Baltimore, Md., for $483,000, setting a then record for American stoneware. It is still the record for cobalt decorated stoneware. In 2018, in England, a new high water mark was established for American ceramics when $806,000 was paid for the John Bartlam teapot sold at Woolley and Wallis. It is now at the Metropolitan Museum of Art.
On Aug. 7, the Zipp family of Crocker Farm sold Dave Drakes 25-gallon poem jar for $1.56 million. The buyer was the Crystal Bridges Museum of American Art. Located in Bentonville, Ark., it was founded in 2005 by Alice Walton. There were three major art museums bidding during the live callback session.
Dave Drakes most recent auction record was established by Brunk Auctions in the fall of 2020 at $369,000. The enslaved and later free African-American potter Dave, as his work is signed, is known today as Dave Drake. He potted at a succession of stoneware shops in South Carolinas Edgefield District. Born, ca. 1800, a man of tremendous strength, he was capable of throwing immense vessels. And 163 years later, the man and his work is entering the discourse not only within academic pottery circles, but through the publicity of auction results of his work over the recent past and the general public. In fact, Dave was even the subject of a Jeopardy question.
He was born into a system of slavery that sought to rob him of his individual identity and yet he was able to rise above that in his day and now not only became a household name, but by at least one metric, he now stands above all other American potters, stated Luke Zipp. No question, the sale was one for the history books.
This particular poem or verse jar reads, Lm . April 12 . 1858 /Dave, and also, A very large Jar which has 4 handles / pack it full of fresh meats  then light candles. There are 25 small slash marks, denoting its 25-gallon capacity. Jars such as this were sealed with candle wax for preserving meat. Four Dave jars are known with four handles, necessary because it took multiple people to lift and carry the vessel, especially when full. About 35 Dave jars are known with poem or verse script. Few are signed and dated. The Lm refers to Lewis Miles, the potters owner who operated Stony Bluff from 1840 to 1868, a stoneware manufactory in the Horse Creek Valley of the Edgefield District. The date on this piece (April 12, 1858) falls in a three-week period from March 31 to April 21, 1858, which includes three other known poem jars (one is at The Met).
The size too immense to dip for glazing, it received a spontaneously poured glaze providing a vertically flowing appearance and multiple textures on its fired surface. The thicker, heavier areas exhibit smooth and glossy olive green striping. There is a luster quality to the multi-tone glaze, ranking this example that much more exceptional.
Surviving without cracks, it has four areas of loss to the rim. The ovoid vessel stands nearly 25 inches high with a circumference of 77 inches. It had a presale estimate of $300,000-$600,000. Consigned by Dr. John Burrison, a Southern folk historian and author in Atlanta, Ga., it has been on loan at the Atlanta History Center for the last 40 years.
To learn more, visit www.crockerfarm.com. 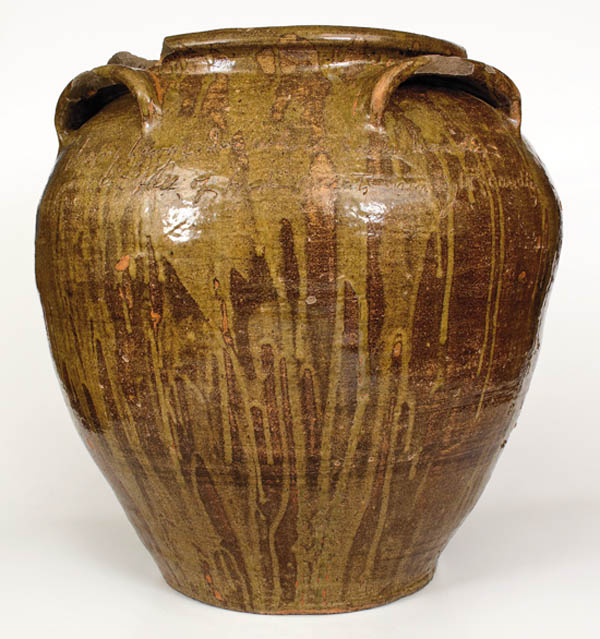