Its the best copy of Action Comics No. 1 ever offered by Heritage Auctions and already the most valuable by far, even before the live auction begins.
Up, up and away, indeed.
Heritage will kick off 2022 by offering the Rocket Copy of Supermans 1938 first flight during its Jan. 13 to 16 Comics & Comic Art Signature Auction. It bears this playful moniker because of the red spaceship stamped on its cover by its first, and, so far, only owner, whose family kept the historic issue in an envelope meant to preserve important documents. And Zod knows this book is as consequential as it gets, Action Comics No. 1 is the palladium title of the Golden Age, the book in which Jerry Siegel and Joe Shuster introduced readers to Clark Kent and Lois Lane and ushered in the era of the superhero.
Certified Guarantee Company knows of only 77 copies of Action Comics No. 1 in existence in any condition and of just two graded CGC FN 6.0, one of which is this copy full of white pages. Collectors have made it clear theyre prepared to tussle over this extraordinarily vibrant example. Shortly after the auction launched Christmas Eve, bidding on the comic book, and rocket-ship stamp itself, rocketed past the $1.5 million mark.
Finding any copy of Action Comics No. 1 is a great day at the office, says Heritage Auctions senior vice president Ed Jaster. Finding this treasure was the highlight of an already amazing year, and, already, the coming one, too. From the newsstand to our current auction, this treasure has never left the family of its original purchaser. Which is just one thing that makes this a truly unique find.
Indeed, this is the first original-owner copy of Action Comics No. 1 Heritage Auctions has offered since 2012, when a CGC GD/VG 3.0 book from the Billy Wright pedigree sold for nearly $300,000. In fact, Heritage has offered only a handful of Action Comics No. 1s over the last decade, with none ever breaking the million-dollar barrier (one copy came close in 2016).
But 2021 was the year that proved just how valuable firsts and bests have become.
Indeed, Heritage began the year by selling the finest-known copy of 1940s Batman No. 1 for $2.22 million, far and away the highest price ever realized for a comic book starring Bruce Wayne and his caped-and-cowled alter ego. Nine months later, the finest-known copy of Spider-Mans debut in Amazing Fantasy No. 15 sold for $3.6 million to become the worlds most valuable comic book sold at auction.
Copies of Action Comics No. 1 have reportedly sold for upwards of $3 million in recent years. So it only stands to reason that Supermans origin story and first adventure, one tale among many featured in one of the worlds rarest comic books, would again join the Dark Knight and Wall-Crawler on the worlds most expensive comic books list.
Action Comics No. 1 is the singular most important comic book published in America, former DC Comics president and publisher Paul Levitz said in 2018, upon the titles 80th anniversary. It created the comic book industry because its sales were so significant. It invited other publishers to come into both the industry and the comic book format, but also the genre of superheroes, which it created, as well. The name superhero doesnt exist yet, but everyone said, that Superman thing, it works, get me one of those. Hell, get me two or three.
All the elements of the superhero formula were already there in some prior work, The Scarlet Pimpernel, and Zorro novels had the secret identity; The Phantom wore a skintight costume, of sorts. A variety of literary sources, John Carter of Mars by Edgar Rice Burroughs and Philip Wylies Gladiator, also had ordinary humans who had extraordinary powers. But it really all comes together in Superman, which becomes the model for the superhero.
And Superman took first flight nearly full-formed: The book introduces the infant boy sent to Earth in the moment before his home planet (not yet named Krypton) explodes. We see, too, his alter-ego: the timid newspaperman named Clark Kent, who is weak  unsure of himself ... a coward  Superman's critique on the whole human race, as filmmaker Quentin Tarantino wrote in Kill Bill, Vol. 2. We also meet Lois Lane, fellow journalist at the Daily Star. And were introduced to Superman as the champion of the oppressed, whose first printed adventure finds him saving an innocent woman from execution, stopping an abusive husband and scaring a corrupt D.C. lobbyist.
The book also boasts the most famous and oft-imitated cover in all of comics. But more than that, it introduced readers to The Man of Tomorrow, who remains as inspirational today as he did all those yesterdays ago. Action Comics No. 1 is one of the worlds most valuable comic books because of its significance and rarity, absolutely, but it remains one of the worlds best comics, too, more than 80 years later. Superman came from Krypton by way of Cleveland, and heres the book in which he changed the world.
To learn more, visit www.HA.com. 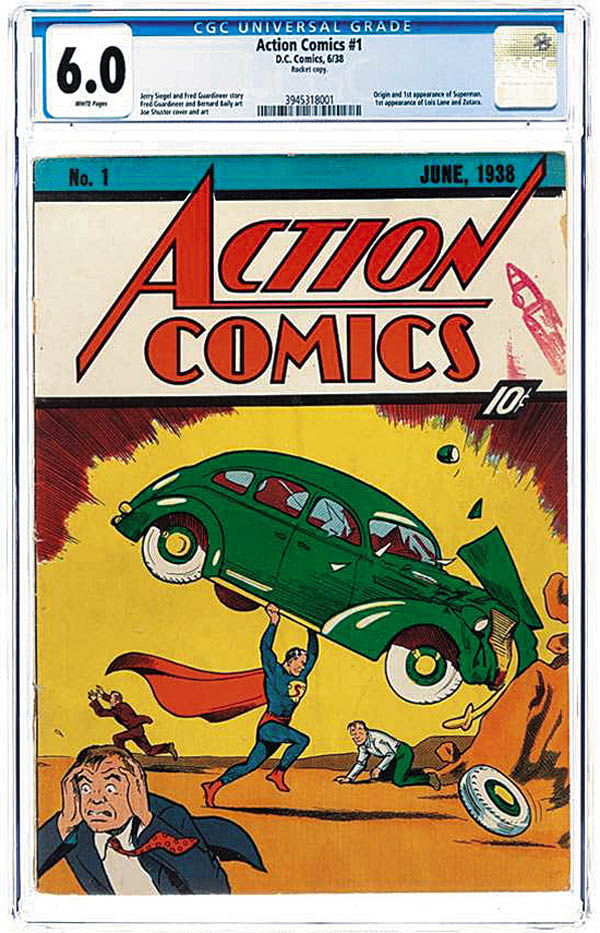