A lidded redware jar from Alamance County, N.C., possibly by Jacob Albright Jr. and Henry Loy, with three-color slip decoration, sold for $35,650 (est. $10,000-$20,000) to Luke Beckerdite, a decorative arts consultant bidding by phone on July 19 at Crocker Farm. Dating from around 1800, the squat-shaped ovoid jar with footed base and open horizontally-oriented handles had a domed lid with pointed finial. Covered in dark manganese, it had floral, geometric and line design work in orange, green, and white slip. The 10-inch-high jar had an old plaster repair to one handle, numerous rim chips, and spots of glaze loss as well as a three-inch hairline to the lid.
A small group of these lidded jars have long been attributed to Moravian potters of North Carolina, notably Rudolph Christ. It is believed through recent scholarship, this work can better be attributed to the St. Asaph's school of potting in Alamance County where the Loy and Albright family of potters worked.
Several of these jars, including this one, were purchased by the late well-known dealer Joe Kindig Jr. in the 1930s. The majority reside today in museum collections, such as the Colonial Williamsburg Foundation, Old Salem Museum and Gardens, The Barnes Foundation, and The Henry Ford Museum.
This jar was sold by Joe Kindig Jr. to Helen Pfaltzgraff Appell as Pennsylvania redware, stated Tony Zipp of Crocker Farm. Sothebys sold the Appell collection in 2003. This jar remained in the Pfaltzgraff Corporate collection, known as the Pfaltzgraff Archives collection. It was consigned by the former Pfaltzgraff Company of York, Pa.
Makers of dinnerware ceramics, among other things, the Pfaltzgraff factory in York went out of business, and the name was recently sold to a Japanese pottery company who today produces wares under the Pfaltzgraff name in Japan. About 260 pieces of antique stoneware from the Pfaltzgraff Archives collection were consigned to Crocker Farm. They will be sold over the next three or four auctions, according to Zipp. Twenty-five of the top pieces are being donated to the York County Heritage Trust located in downtown York, Pa.
Rentzels Auction Service Inc. will also be selling material from the Pfaltzgraff Archives Collection, including stoneware, art pottery and numerous mid-20th-century collectible items. The sale will be held in the York Expo Center on Saturday, Aug. 9.
For more information on Crocker Farm, visit www.crockerfarm.com. 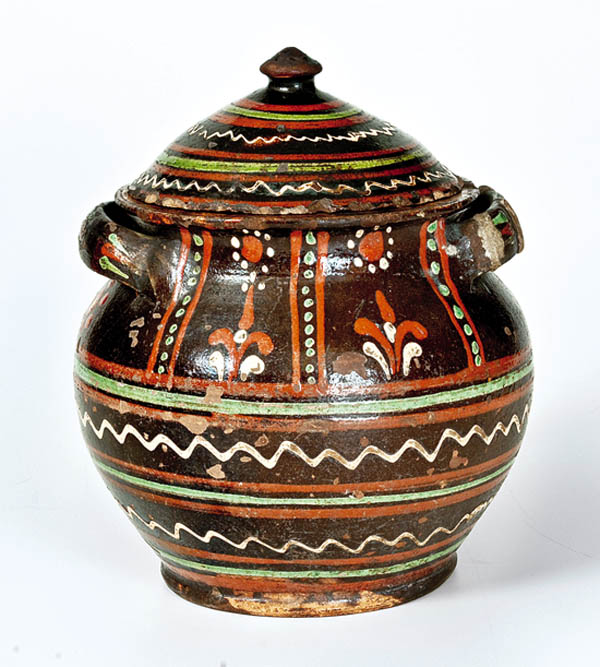