A rare five-gallon stoneware churn with four slip-decorated marching Civil War soldiers sold for $402,500 at Crocker Farm's 10th anniversary auction on July 19.
The Zipps of Crocker Farm, a Maryland-based auction company specializing in American stoneware and redware, sold the unique churn, likely from Fort Edward, N.Y., as the first lot in their 507-lot sale. The buyer was New York City collector Jerry Lauren bidding by phone. Jerry Lauren is the older brother of Ralph Lauren and executive vice president of the fashion empire the Ralph Lauren Corporation. He is a well-known collector of American folk art including weathervanes, decoys, and stoneware. The underbidder was also a collector bidding on the phone.
The hammer price of $350,000 was the highest hammer price for American stoneware at auction (Crocker Farm charges a 15 percent buyer's premium). The Absalom Stedman ovoid jug with spread-wing eagle decoration, which sold for $402,900 on May 5, 2012, at Pook & Pook, is still the highest priced piece of stoneware sold at auction including buyer's premium.
The circa-1865 churn is 15.5 inches tall and was estimated at $25,000-$35,000. It was consigned by a small East Coast museum that "wishes to remain anonymous," according to Tony Zipp. It was purchased in the 1930s and donated to the institution sometime in the 1960s. The museum is undergoing a building project, which was the reason given to why it was consigned.
For additional information, visit www.crockerfarm.com. 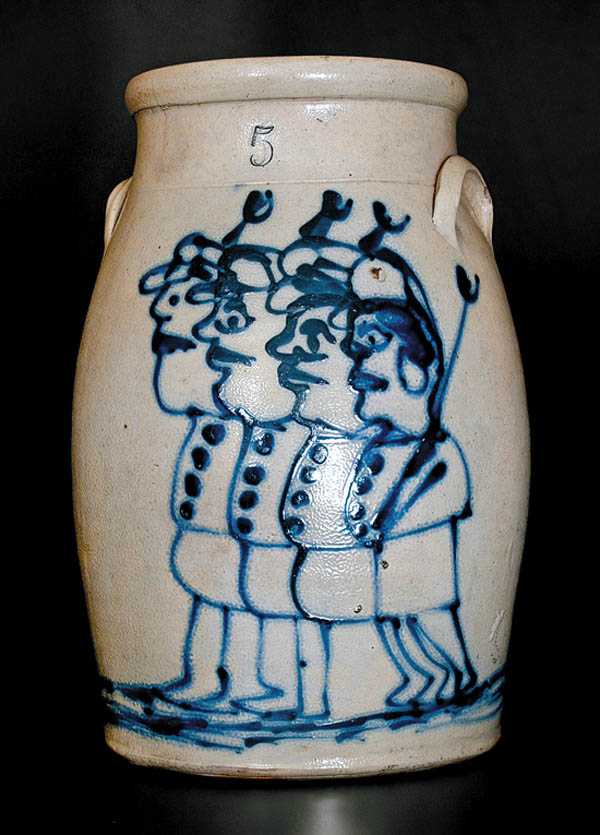