Crocker Farms March 5 auction of American stoneware and redware pottery started off with a bang at the firms new location in Sparks, Maryland. After intense bidding between the floor and nine strong phone bidders, lot #1, a heavily-incised stoneware memorial jug, was finally hammered down to a collector bidding for a client for $138,000 (including 15 percent buyers premium). It was the second highest price an example of American stoneware has ever brought at auction, and the highest price in twenty years.
Estimated at $20,000 to $30,000 and described in the auction catalog as one of the most profusely-incised pieces of American stoneware known, the jug featured an elaborate design on one side of a flowering plant surmounted by three birds, a star, and a heart. The reverse was decorated with a large urn below the incised inscription Benjamin Herington / june the 1st 1823 / aetat 22. Herrington, a potter by trade, died on the date noted on the jug, having drowned in Connecticuts Norwich Harbor at the early age of 22. Certain characteristics of the jug, most notably its impressed circle decoration and the style of its bird designs, corroborate that it was likely made in Connecticut, most likely by potters who knew Herrington personally. Two mysterious pairs of initials incised under the handles are possibly the jugs creators.
Shortly after the crowd had hushed, a second piece broke the $100,000 mark. Lot #15, a large-sized stoneware jug with elaborate animal decoration, was vied for by several phone and floor bidders and ended up selling to the same bidder who had won lot #1 for $103,500 (including 15 percent buyers premium). With a grand size and bold decoration, the jug commanded the viewers attention, and received plenty of it during the preview. It measured an outstanding 24-1/2 inches tall and may have served as a storefront piece in the window of New York States Poughkeepsie Pottery, operated by Philip Riedinger and Jacob Caire. Far exceeding its estimate of $15,000 to $25,000, the jug was decorated top-to-bottom with a pine tree holding four birds and flanked by a sitting dog and reclining doe, a combination of several motifs the potting firm was known for. The monumental piece now belongs to a very small group of American stoneware pieces to hit six-digits at auction. Crocker Farms March 5 sale marked the first time this feat was achieved twice in a single auction. Anthony Zipp, partner in Crocker Farm, Inc., states, The stoneware market is heating up right now. Prices for high end pieces are stronger than ever.
Several other stoneware pieces sold well. An extremely rare incised COERLEARS HOOK stoneware jar (estimate $15,000 to $25,000) sold to the phone for $25,875, and a miniature Manhattan stoneware jug with watchspring decoration sold well above its $3,000 to $5,000 estimate at $9,200. The Coerlears Hook jar, one of a small number known, was made in Manhattan during the late 18th century by Thomas Commeraw and just recently found in the attic of a house in Virginia Beach. Late 18th- and early 19th-century Northeastern stoneware has been hotly-contested in our last few sales. It seems to be on the rise, notes Zipp. Other stand-out selling prices included $17,825 for an Anna Pottery frog-form pitcher (estimate $8,000 to $12,000), $10,925 for a one-gallon Norton stoneware jug with pheasant decoration (estimate $3,000 to $5,000), and $8,625 for an Alexandria, Virginia, pitcher marked H. SMITH & CO. (estimate $2,500 to $4,500).
Redware prices were also solid. Leading the group was a slip-decorated Pennsylvania redware inwkell, signed Adam Ownhouse and estimated at $15,000 to $25,000, which sold to the phone for $28,750. It had been discovered at an estate sale in York County, Pennsylvania, shortly before Crocker Farms March 5 auction. A large-sized John Bell redware dog crossed the block to a phone bidder at $19,225, nearly twice its high estimate of $7,000 to $10,000. Another recent discovery, a Great Road redware jug (estimate $1,500 to $2,500) attributed to Tennessee potter, C.A. Haun, sold for $2,013. A single-owner collection of rare signed New York State redware was offered, with the top lot being a colorful cobalt-decorated jug by Lorenzo Johnson of Newstead (estimate $2,500 to $4,500), which brought $5,463. A presentation tobacco jar from Blooomfield (estimate $2,000 to $4,000) sold for $4,600, an Alvin Wilcox jar signed by a second potter (estimate $800 to $1,200) brought $1,840, and a slip-decorated jug by Elonzo Lewis of Bushnells Basin (estimate $1,000/$1,800) sold for $3,163. A number of multi-glazed pieces from the Shenandoah Valley all crossed the block. An extremely rare cake mold attributed to Eberly of Strasburg (estimate $2,000 to $3,000), which was pictured in the popular book The Pottery of the Shenandoah Valley Region, brought $3,738. Also from the Shenandoah Valley, a miniature jar (estimate $1,500 to $25,00) sold for $2,875, a semi-ovoid mug (estimate $800 to $1,200) brought $2,013, and a cuspidor (estimate $8,000 to $1,200) sold for $1,610.
Only two lots in the sale were reserved, and 100 percent sold. It was a great sale, says Zipp. Besides the two six-figure lots, we had a number of strong prices in all regions of collecting. Well see what our Summer auction turns up.
All prices mentioned include a 15 percent buyers premium. Crocker Farm is now accepting consignments for its inaugural antiques and decorative arts auction on June 4. Already on hand are a set of rare signed Pablo Picasso prints, American Civil War flags, English ceramics, and painted furniture. Consignments are also being accepted for Crocker Farms July stoneware and redware auction. For more information, call (410) 472-2016, e-mail the auction house at info@crockerfarm.com, or visit the firms website at www.crockerfarm.com. 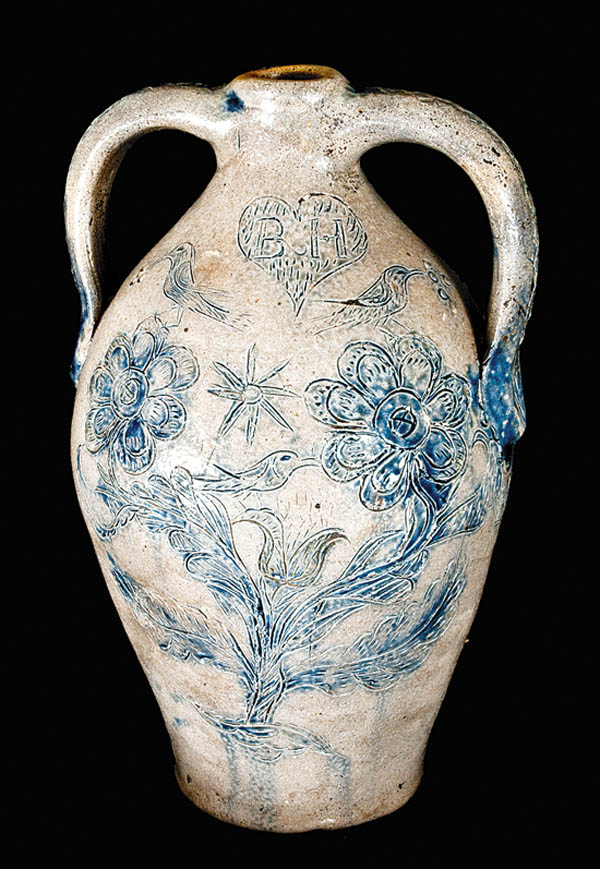