The Art Of Mechanical Banks

Mechanical banks were invented in the middle of the 19th century to encourage children to save money. When many hear the word mechanical, they think of an engine of some sort, but these banks have no engines. Instead, they rely on gravity or someone using a handle or lever to make them move.
Many mechanical banks depicted someone or something historical and were usually made of cast-iron. They were handpainted in one of several factories and were sold for mere pennies. The rarest banks in good condition can fetch hundreds of thousands at auctions. The highest priced banks have most of the original paint and still work well.
The bank featured in one of the photos shows a sitting man who depicts William Boss Tweed, the politician who ran Tammany Hall, the Democratic Party political machine of 19th century New York city and state. He was eventually put in prison for graft and corruption, along with others. The weight of the coin makes Tweeds arm lower and deposits the penny into a slot.
Another example of a mechanical bank is the H.L. Judd company dog on a turntable, featured in the second photo. Place the coin in the dogs mouth and turn the crank, and watch the dog march into the house to deposit the penny. This bank is from the late 1800s.
For those lucky enough to find a version of the Boss Tweed bank in good condition and with the intact original white and orange paint, it could be a treasure worth thousands.
Shop goers can find both of these mechanical banks at the Grist Mill Antique Center, located at 127 Hanover St., Pemberton, N.J. The multi-dealer shop is open seven days a week, from 10 a.m. to 5 p.m., except Thanksgiving and Christmas.
For further information, call 609-726-1588. 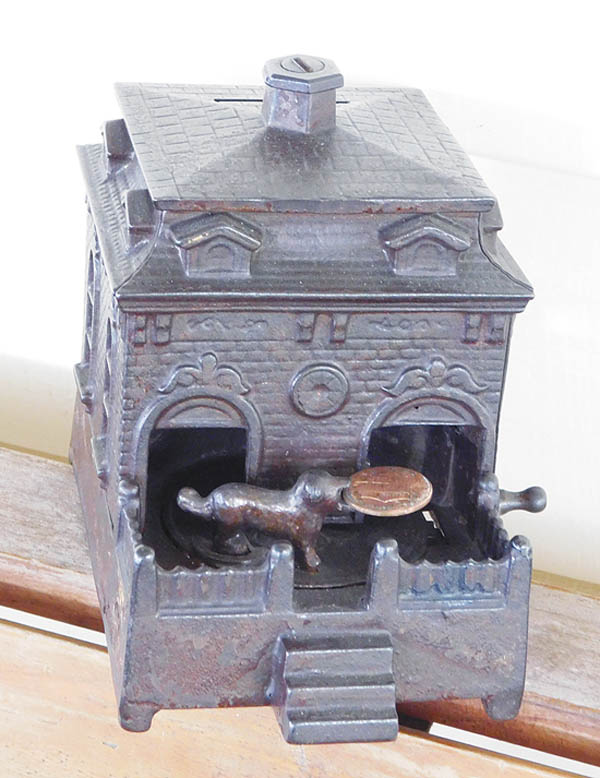