The Metropolitan Museum of Art recently announced that it has acquired an extremely rare bronze relief attributed to Gian Marco Cavalli, an Italian goldsmith, sculptor, print engraver, and medalist who worked for the Gonzaga court in Mantua. Created around 1500, it is both the largest and one of the most technically sophisticated examples of a bronze roundel known from the early Renaissance. Lavishly embellished with gilding and silver inlay, the beautifully rendered configuration shows four figures from Roman mythology and provides new insights into the experimentation and impeccable craftsmanship that are the hallmarks of early north Italian bronzes.
The bronze roundel is an absolute masterpiece, standing apart for its historical significance, artistic virtuosity, and unique composition, said Max Hollein, the museums Marina Kellen French director. It is a truly transformational acquisition for the Mets collection of Italian Renaissance sculpture. We look forward to further studying and displaying this magnificent work, one that establishes Cavalli as one of the ingenious creators of the Gonzaga court style.
Cavalli (born about 1454, died after 1508) collaborated for over 30 years with Andrea Mantegna (1430/311506), the principal painter to the Gonzaga court in Mantua, and with Antico (ca. 14601528), the Gonzaga familys principal sculptor. Yet the attribution of works to Cavalli remained challenging until the discovery of the roundel in a British country house just 19 years ago in 2003. The roundel may have been made for Isabella dEste, Marchioness of Mantua (14741539), the most important woman patron of the Italian Renaissance.
While The Met is rich in paintings and prints by Mantegna, and holds the largest collection of Anticos gilt and silvered bronze sculptures outside Europe, there was no equivalent example in bronze relief in our collection. With this exciting acquisition, The Met is now one of the only museums in the world that can illustrate the fundamental collaboration between Mantegna, Antico, and Cavalli under the patronage of Isabella dEste, stated Dr. Sarah E. Lawrence, the Iris and B. Gerald Cantor curator in charge of European Sculpture and Decorative Arts.
The Mantuan roundels sumptuous gilding, meticulously inlaid silvering, and masterfully varied chasing identify the roundel as a masterpiece in which Cavalli expressed his superlative abilities as a goldsmith and sculptor, added Denise Allen, curator in the Department of European Sculpture and Decorative Arts.
With an integral frame and a suspension loop so that it could hang on the wall like a painting, Cavallis roundel translates a complex pictorial narrative into the sculptural language of gold, silver, and bronze, demonstrating the tightly bound relationships among painting, sculpture, drawing, printmaking, and goldsmiths work at the Gonzaga court. The relief, an allegory celebrating harmony, shows Venus, goddess of love, subduing belligerent Mars, god of war, and all others under her power. It depicts the victorious golden-winged goddess enrapturing Mars with her gaze, while her husband Vulcan fabricates the war gods helmet. The Latin inscription admonishes them: Venus Mars and Love rejoice. Vulcan, you labor!
The roundels symbolism expands upon the tradition of comparing Isabella dEste to Venus, most famously depicted in the Parnassus (1497; Paris, Louvre) painted by Andrea Mantegna for Isabellas studiolo (study room) in the Ducal Palace. Like Mantegnas picture, the roundel also shows Mars, Venus, Cupid, and Vulcan but in an entirely original conception drawn from a compilation of contemporary Gonzaga court poetry and popular romance. The roundels resonance with the art and literature associated with Isabella suggests she may have commissioned it, perhaps to complement the paintings displayed in her studiolo .
The purchase of the roundel was made possible in major part through the extraordinary bequest of the distinguished Met curator emeritus of European sculpture, James David Draper (19432019). Draper led the Mets efforts to acquire the newly discovered roundel in 2003, but the museum lost it at auction. At the time, he wrote, This is the most thrilling Renaissance bronze to appear on the market in ages. Draper spent a 45-year career at the Met, building the museums collections of 15th- and 16th-century Italian and 18th- and 19th-century French sculpture. He retired in 2014 as Henry R. Kravis curator in the department of European Sculpture and Decorative Arts. As executive director of the Isaacson-Draper Foundation, he generously supported acquisitions, exhibitions, programming, and the museum's Thomas J. Watson Library. In recognition, the Isaacson-Draper Foundation was elected Foundation Benefactor in 2004.
Major support for the acquisition was also provided by Alejandro Santo Domingo and Michel David-Weill along with other trustees on the Mets acquisitions committee.
The Met plans to display the roundel in Gallery 536. 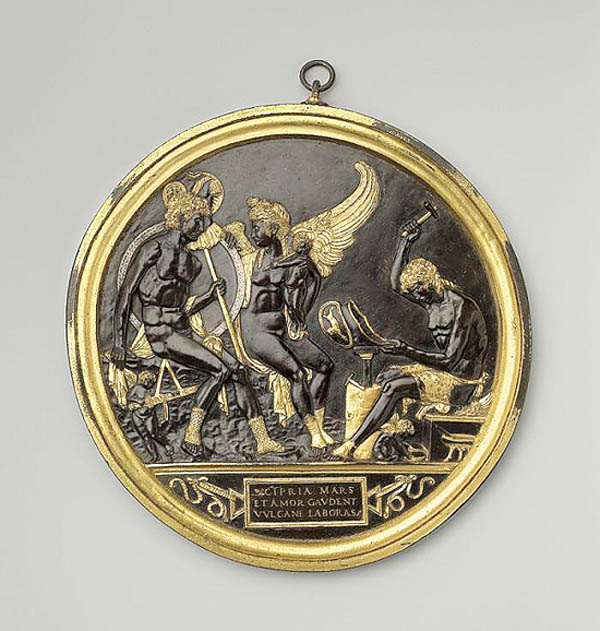