One of the longest-running and most beloved comic strips of all time, Rudolph Dirks "Katzenjammer Kids" debuted December 12, 1897. It appeared in the American Humorist, the Sunday color supplement of Hearsts New York Journal. Up until the 1980s, it was still running in a few papers, and may still be doing so.
Hans and Fritz, the Katzenjammer Kids of the title, were the first in a long line of nasty, unruly children to come from the pens of cartoonists over the next 100 years. The artist responsible for their comic adventures was a 23-year-old German immigrant and one of a small select group of men now called the "founding fathers of the comic strip."
He joined the New York Journal in 1897 and was assigned by its editor to come up with a comic strip to compete with R.F. Outcaults fantastically successful "Yellow Kid." He modeled the result, the "Katzenjammer Kids," after the mid-1800s German comic series, "Max and Moritz," by Wilhelm Busch.
Hans and Fritz were two incorrigibles who thought April Fools Day and Halloween were year-long holidays. They played devilish, rotten tricks upon the adult world, but especially upon Mama, the Captain (a boarder in the house), and The Inspector, truant officer for the school system. Week after week, year after year, they left a trail of utter chaos and destruction.
In 1912 Dirks and Hearst had a falling out and the cartoonist jumped ship to the rival New York World. After a lengthy battle in the courts, the judgment gave Dirks the rights to the characters and Hearst the strips title. In quick order two comic strips soon appeared featuring Hans and Fritz.
One was the original "Katzenjammer Kids," now being drawn by another cartoonist. The other, "The Captain and the Kids" by Dirks, first appeared on June 14, 1914 - with the Kids now having a Dutch heritage. When the World shut down in 1930, Dirks and his strip became part of United Feature Syndicate.
Rudolph Dirks died in 1968, but his strip lives on, being continued by others. Starting in the 1950s, its success began to wane. But the Kids were still popular enough to appear in television advertising in 1970.
"The Katzenjammer Kids" were also among the earliest animated film shorts. In 1917 William Randolph Hearst organized the International Film Series company to make and distribute cartoons based on the comic strips running in his newspapers. The coming of war put a halt to this pioneering effort.
Collectibles of the "Katzies" are far from being the treasure trove that awaits us for "Buster Brown" or the more recent comic strip headliners, but a lot of ephemera, playthings, and merchandise was produced up to the 1950s. Toys head the parade, especially a three-wheel platform with Hans and Fritz seesawing whenever pulled. Made by the N.N. Brass Company sometime between 1900 to 1910, today it sells for over $500.
German-made bisque figures of the boys, three-inches tall, usually carry $75 estimates in auctions. Other toys include a series of soft dolls, made sometime between 1906 and 1910, and a set of rubber toys by Shavoir Rubber Co., Springdale, Connecticut, in the late 1940s.
The strip was a gigantic hit with the public in the years leading up to World War I. Many manufacturers eagerly paid for rights to market a wide variety of household and personal products modeled after the cast of the comic strip. In 1906, for instance, a set of tea cozies could be found on store shelves.
Postcards based on "The Katzenjammer Kids" are many, most of them easy to find and reasonably priced (from $5 to $10). Of the 150-plus cards printed by the American Journal Examiner in their Sunday supplement as premiums in 1906 and 1907, at least 34 were about Hans, Fritz, and their crew. A small number of other postcards, including some advertising various newspapers and Katzenjammer merchandise, were also printed in the years between 1906 and the late 1940s.
The comic strip inspires other pre-1910 ephemera. The list includes die-cut mechanical valentines; among these a set of paper puppets by Raphael Tuck & Sons. During 1902 until 1903 the Hearst chain of newspapers ran a weekly series of 10-inch by 14-inch, thin cardboard pages of mechanical paper toy cutouts in its Sunday newspaper supplement sections. All of their famous comic strips were used, and none more often than the madcap German family ("The Katzenjammer Kids Rocking Horse," January 18, 1903; and "Mrs. Katzenjammer and the Pocket Book," April 6, 1902, etc.).
Several reprint comic books, some under the comic strips name and some as "Hans and Fritz," appeared between 1903 to 1929. Original story comic books showed up in 1945 and lasted until 1954, a few being "Feature Books" by David McKay, and one a 3-D special by Harvey.
In 1935 Saalfield published a Comics Paper Doll Cut-Out Book of many comic strip stars, one page of which was given over to "The Katzenjammer Kids." This had paper dolls and three changes of clothing each for the Captain, Mama, and the two rascals. Throughout the 1930s, the Katzenjammer Kids and pals joined other cartoon and comic character favorites as paper dolls and toys in both the Sunday newspaper color sections and the daily black-and-white comic strip pages.
Other Katzenjammer collectibles include a packet of paper toy punch-outs, with two eight-inch by 11-inch sheets, sold in 1945; a musical songbook in 1927; and greeting cards in the 1930s. In 1937, Pictorial Review-Delineator magazine offered a 13-inch by 17-inch "National Flag of the Comics" for a mere dime as a premium as readers.
The "Katzenjammer Kids" is just one of many comic strips to be heavily merchandised and to later become so collectible. The Katzies have a lot of company, and collectors love all of them. Everything ever made or printed about them, including the original comic strips themselves, are eagerly sought and treasured. 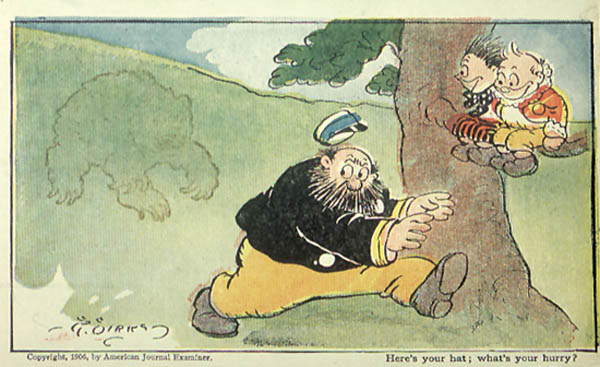