Easter is a time of joyous rebirth, religious celebration and the renewal of new life with the coming of spring. Antique Easter greet-ing cards offer a stunningly beautiful opportunity to tell how people in Victorian and Edwardian times expressed their feelings and wishes during this holiday. Easter greeting cards preceded Easter postcards for several decades through the nineteenth century and continued into the twentieth century. Easter cards emerged at the height of the German chromolithograph color printing industry and reflected many decades of design changes from the Aesthetic and Art Nouveau movements.
Easter cards represent changing cultural views of the holiday. While valentines existed since the 18th century and the Christmas card from the 1840's, it was not until the 1850's and 1860's that Christmas, birthday and New Year's cards were widespread in soci-ety. Easter cards emerged in the 1870's and were popular from the beginning of the 1880's forward. Perhaps they caught on slower as it was a religious holiday and it might have taken time for the public to regard sending cards as socially appropriate. The first Easter cards emerged in striking colors and sometimes with silk fringe. Beautiful chromolithographed images required separate pressings by inked stones, one press for every color in the design. Louis Prang, the Father of the American Christmas Card, is responsible for some of the most wonderful period greeting cards. Prang held competitions to recruit some of the best artistic talent to design his cards. His cards are important because he has copyright dates on them, which can assist in dating other period greeting cards.
Easter cards of the 1880's illustrated well-known holiday and secular themes featuring children mixed with traditional symbols of new life and spring implying Easter's religious significance of rebirth and resurrection. A child might hold an egg, watch an egg open, gather eggs or emerge from a cracked egg as if he or she was a young chick being born. Some children watched eggs that would crack and reveal flowers, a chick or a rabbit. Sentimental cards featured children in bird's nests as if the child was a little bird nesting against a spring scene. These children were sleeping, waiting to wake to the spring and rebirth of the Easter season. Some 1880's cards were comical. Artists used eggs as a large feature to the design including parts of a bicycle or a hot air balloon.
Familiar spring features such as birds, butterflies and early flowers like crocus or apple blossoms were popular through the 1880's. In addition to the secular images, an Easter cross or lamb with religious verse also appeared on some cards. Rabbits appeared in two forms on 1880's cards. Some cards featured rabbits in a spring setting symbolizing the fertility of spring. German cards also featured an Easter Bunny, delivering an Easter card and colored Easter eggs to children.
Victorian greeting card designs reflected changes in 19th-century taste. The Aesthetic movement (1868 - 1901) brought Asian-inspired designs and natural design elements. By the middle of the 1880's, Easter and other greeting cards adopted naturalistic designs and a subdued, earth toned color palette. Easter cards had greater religious themes, which included cherubic choir-singing children. Popular chicks and flowers continued to appear. By the very late 1890's, crosses were appearing with greater popularity.
Easter greetings in the Art Nouveau and Edwardian periods are some of the most aesthetically beautiful of all greeting cards. The Art Nouveau movement (1890-1905) illustrated beautiful flowers and natural themes as major design features. Religious themes in-cluded child angels or groups of angels. Art Nouveau-styled flowers complimented angelic subjects. The color palette included pastels of light green, yellow, turquoise blue, purple, light baby blue and very light pink. Die cut cards, three-dimensional cards and cards with embossing and paper lattice cutwork were magnificent. The Art Nouveau period enjoyed flowers and foliage as natural beauties in their own right. It is common to not only see Easter lilies with crosses but also daisies, forget-me-nots, palm leaves and pansies mixed in with a praying angel, choir singer child or chicks. Many of the most popular Easter greeting card makers of this period in-cluded Ernest Nister and Raphael Tuck.
Many Easter card designs have symbolic meanings almost hidden from us today. Flora's Lexicon (1857) and The Language of Flowers help us decode some floral meanings. Flowers on Victorian Easter cards included lilies (purity, modesty), crocus (cheerful-ness), honeysuckle (generous, devoted affection) and violets (modesty, faithfulness). Edwardian palms (glory, immortality, victory), daisies, (innocence), calla lilies (magnificent beauty), snowdrops (consolation, hope), daffodils (chivalry) and poppies (consolation) emerged as popular Art Nouveau floral designs. Eggs represented the beginning of life and were a symbol of sacrifice in the Passover meal. Rabbits represented fertility and new life. The Old Testament lamb stood for sacrifice and faithfulness, which translated into Christ's passion and sacrifice.
Victorian and Edwardian Easter cards represented the heyday of holiday greetings. Early juvenile-themed cards that graced Victo-rian scrapbooks changed into the religious, spiritually awakening Easter cards of the Art Nouveau and Edwardian periods. Whichever period you wish to collect, it is inspiring and uplifting to see these small works of art that were exchanged during this special holiday.
About the Author: Barbara Johnson, Ph.D. is a sixteenth-century British cultural historian. She specializes in the material objects of Elizabethan and Jacobean aristocrats and their lives in their country homes. She is the author of Antique and Vintage Fashions, 1745-1979 by Collector Books, August, 2009 and Valentines, A Collector's Guide 1700's-1950's, by Collector Books, 2010. Books are available at www.collectorbooks.com, in bookstores and online. 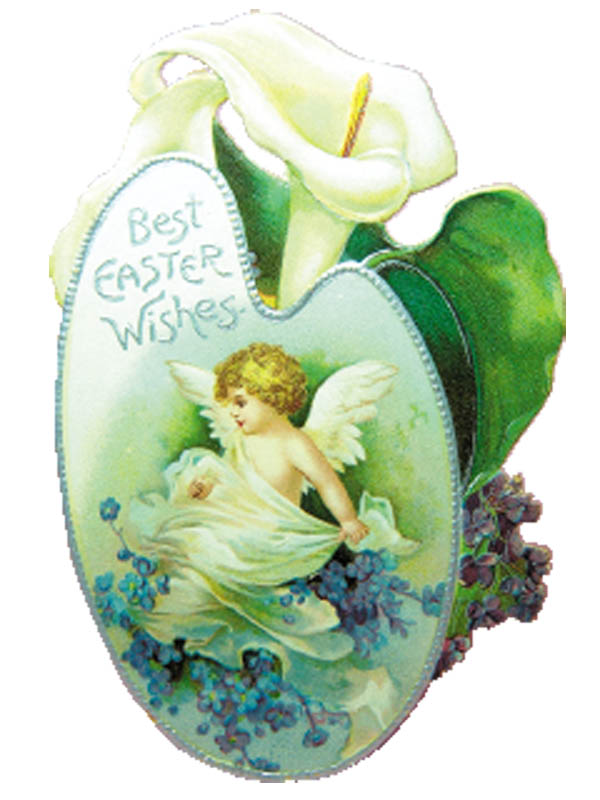